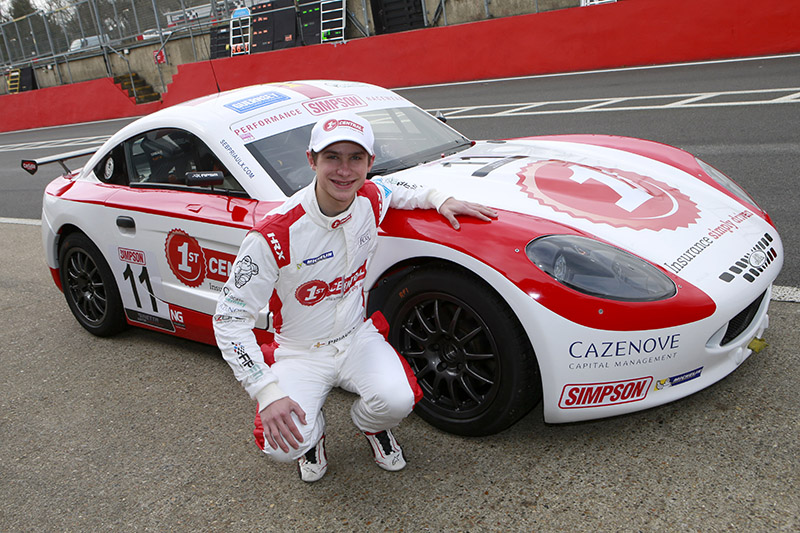 Guernsey racing driver Sebastian (Seb) Priaulx will be backed by car insurance provider, 1ST CENTRAL, as he prepares for the next steps in his racing career.

For the 2017 racing season, Seb will again be competing in the Simpson Race Products Ginetta Junior Championship, but this time he will have the logos of 1ST CENTRAL on his Ginetta G40. Winning the title is his clear aim.

This is a major boost for the Guernsey-based 16-year-old, who is the son of triple World Touring Car Champion, Andy Priaulx.

“Having 1ST CENTRAL support me as I head into 2017 and beyond is an amazing boost for my career. I know from my father how important it is to secure sponsorship at such a crucial stage in my development. We can now work on laying down a foundation for my career and to be able to create a long-term plan is amazing,” he said.

Simon Walker, Group Chief Operations Officer, at First Central Group, said “We are excited to have the opportunity to sponsor Seb as he progresses in his racing career. As a relatively young, but rapidly growing company, it made perfect sense to lend our support now. We are passionate about developing talent, and Seb, who is undoubtedly driven to develop his skills, is a shining example of this. We are very much looking forward to getting behind Seb and watching his career unfold as he continues to fly the flag for Guernsey."

This will be the second season in the championship for Seb, and Ashley Gallagher, Ginetta Championship Manager, commented: “We are delighted to have Seb back on the grid for 2017. Seb finished second in the Ginetta Junior Rookie Championship and won the Ginetta Junior Winter Series in 2016. Ginetta has already announced a number of quick drivers who will return to the grid this year, therefore, I am certain that it will be another exciting year of Ginetta junior racing."

Car insurance provider 1ST CENTRAL was launched in 2008 and has rapidly gained a reputation as a company that is committed to nurturing young talent.

Meanwhile Seb has also quickly become known for his speed and skills behind the wheel of karts and racing cars. He will again be competing with JHR Developments, who fielded him in this series in 2016 when he was a rookie, and the Ginetta Winter Series, which he won with two victories and two second places in the four rounds. In the Junior series he was on the podium six times and notched up his first win at Silverstone. He was the only rookie in 2016 to twice start a race from pole position.

Unsurprisingly, Seb’s career is watched closely by his father, who commented: “I'm a very proud racing father, so for Seb to have attracted such a high-profile, long-term sponsor so early in his career is pretty amazing. We are all excited about his future and are already looking to him moving into Formula 4 and then heading to a career that hopefully will take him right to the top.”

The Junior Championship is a series for 14 to 17-year-old racing drivers who are starting out on their motorsport careers, held over 25 rounds at 10 race weekends with each race lasting 15 minutes. It is on the support programme for the prestigious British Touring Car Championship.